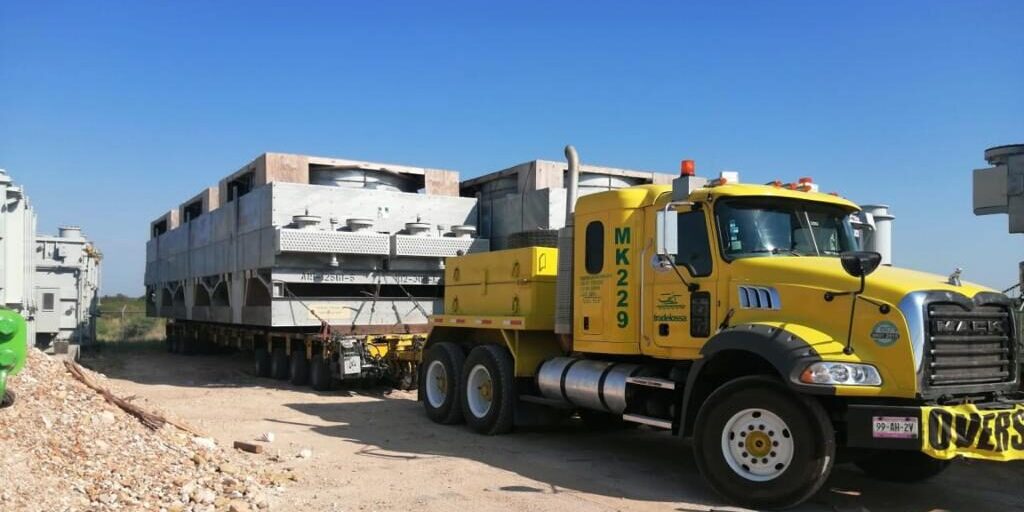 For almost a year Tradelossa realized the transportation tasks of 33 Coolers for the energy project ”Empalme” through American and Mexican territory, reaching more than 23 thousand miles and loaded more than 1500 tons during the last eight months.

Tradelossa’s scope within the project began in the city of Laredo, Texas where Tradelossa received 33 Coolers throughout the year, performing cargo rigging operations within the United States for their border crossing into Mexican territory, where they would travel to their destination in the coastal city of Panuco, Veracruz.

The task of this team would be to prepare and condition, in collaboration with our clients, each of the 33 components that would cross the border to the Mexican state of Veracruz.

Once properly modified and making use of two 120-ton cranes together with a three-rocker system and spreader bar, our rigging team would perform the transfer of the 33 pieces to our trucks with an 8-axle hydraulic configuration, leaving the components ready for their transfer to the border and then to Mexican territory.

Departing in a convoy of 5 to 6 components per trip and with such trips lasting up to almost two weeks between the border crossing and transfer within Mexico.

Tradelossa was in charge of the transportation and safe arrival of the 33 Coolers to their destination point on the Gulf of Mexico side in the city of Panuco, Veracruz where each piece was taken and received at our customer’s facilities where they would be unloaded and the equipment released to repeat the process and the trip again.

Throughout the project, Tradelossa faced multiple challenges. During the entire process, our team approached local authorities to schedule the crossing of the pieces through the most populated areas along which our selected route marked us.

To ensure the integrity of all the members involved in the operations, it was necessary to follow a rigorous system of measures to avoid contagion and exposure to Covid-19.

This meant the exchange and delivery of the necessary paperwork for the border crossing in a digital way, it also meant constant monitoring of our team of experts residing in Laredo, Texas because it was their responsibility to review and maintain each piece prior to the border crossing between the United States and Mexico.

It was in this way that Tradelossa completed one of its most important projects of the year, coordinating operations in two different countries and adapting to the necessary health and safety processes, successfully concluding yet another project.

Hauling and Rigging Operations for the ”Santa Lucia” Airport
22 October, 2020